Trying out Django 1.8 in less than 60 seconds

Django 1.8 is the next LTS release of Django. This means that it will receive official support for at least 3 years after its day of release.

Also, Django 1.8 comes a long with a great set of new features, like the Model._meta API, the support for multiple template engines and the new security enhancements.

So let's take a closer look at these new features in just a few seconds.

Setting up a Django 1.8 project

The first thing we have to do is start a new Django 1.8 Beta project. Doing so on your local machine or on a remote server, requires using venv or a similar technology, in order not to mess up other Django projects that you host on the same machine.

In SourceLair we are taking away all this hassle from you. Open up the "Start a new Project" dialog, choose "Django" as the project type and then choose "1.8 (Beta)" as the Django version of your project. 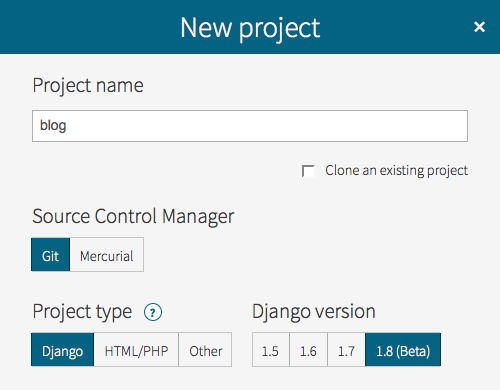 Press the "Create project" button and you are all set up; you have a new Django 1.8 Beta project available.

Django lives in the heart of SourceLair; the majority of our code base is written in Django and we wouldn't be able to deliver high-quality software in such pace, without the strong foundation of such a framework.

For this reason, starting today we commit in supporting every Django beta release officially in SourceLair within 24 hours from its official release, in order to make it easier for everyone to test it and thus improve the overall quality of the final release.

Don't wait any longer, go to sourcelair.com, try the new Django 1.8 out and let us know what you think!